Victoria's Secret Angel
Since 2010.
Candice has been officially an Angel since 2010. She made her return to Victoria's Secret after 1 year of hiatus due to her first pregnancy on 2019 shooting for the Fall collection and an upcoming campaign to be released.
Tropic of C CEO and Founder
Since 2018 Candice launched her own swim line on 2018 under the name of Tropic of C. The brand is 100% eco friendly and designed with recycled materials. The brand is avalaible currently in its own e-commerce and other luxury e-commerces listed below.
Tropic of C
Goop
Moda Operandi
Buyma
Olivela
Selfridges
Tuchuzy
Holt Renfrew
Factory 54
LuisaviaRoma
Bandier
Fred Segal

Divine Candice is a non-profit site that is no way affiliated with Candice, her management, co-workers or family members. This is site is ran and maintained by fans for fans. All images, video footage and other media are copyright to their respective owners, no copyright infringement is intended. If you would like any content that is rightfully owned by you removed please contact us.
Candice Swanepoel for Mônot’s first campaign.

Great news! We have a new campaign for our beauty.

The images were shot by the photography duo Luigi & Iango near Maraya, the largest mirrored building in the world. The black and white womenswear looks are set in stark contrast against the centuries-old golden-hued rock formations. Inspired by the contemporary artist Lucio Fontana and the architect Eero Saarinen, the collection is grounded in a geometric concept where strong lined silhouettes and peekaboo apertures create a Neo-futuristic tone.

When I saw Maraya, I knew that was where I wanted to shoot my campaign. Maraya is Arabic for mirror. For me it symbolized self-reflection. And I know that right now Saudi Arabia is in the process of its own sort of self-reflection as it begins to open up towards the rest of the world and to empower its women to help shape the future of the kingdom. This is the first project of its kind that has ever taken place is AlUla and I feel extremely honored that Mônot can be a symbol of the country’s transformation, said Mizrahi.

The campaign’s stylist was Carine Roitfeld, makeup artist was Georgi Sandev and hair was done by Luigi Murenu. Mizrahi wanted to make sure many different cultures and ethnicities were represented during the shoot. The designer also hired an all-female local production company as another way of encouraging the broadening horizons of Saudi citizens.

Starting July 8, the ads will appear primarily online, and the participants will post images on their different social media platforms. In addition, Mizrahi is creating a coffee table book about the 24-hour trip to AlUla, filled with images of the campaign and behind-the-scenes shots. The book, which comes out in September, will be sent to current and potential clients.

Mônot, which officially launched last September, is sold online and via retailers such as Harvey Nichols, Browns, Moda Operandi, Tsum, and Luisa Via Roma. Mônot designs have been worn by such celebrities as Zendaya, Saoirse Ronan, and Demi Moore.” 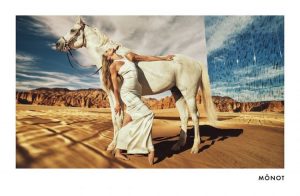 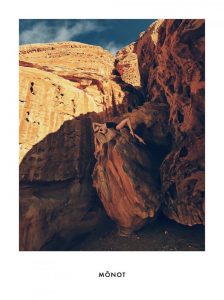