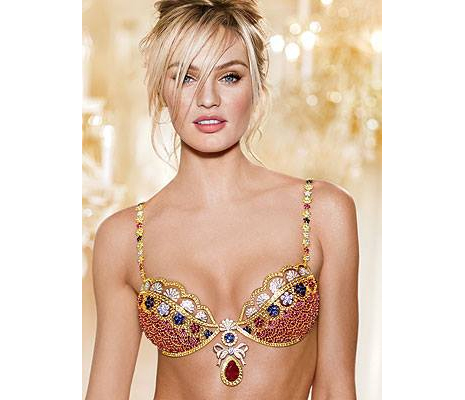 What would be more nerve-wracking: Showcasing your cleavage in $10 million of jewels on national TV, or following in the footsteps of major supermodels like Gisele Bündchen, Heidi Klum and Alessandra Ambrósio, who have all done it before you? Luckily, we’ll never have to find out — but Victoria’s Secret Angel Candice Swanepoel will when she hits the catwalk for this year’s Victoria’s Secret fashion show.

Though the model is just the latest to have the honor of wearing the line’s annual “Fantasy Bra” creation, she will be wearing one of the most expensive ever made — thanks in part to the enormous ruby dangling from the center panel.

“They had to mold my body to be able to make [the bra], and I was really excited,” Swanepoel tells PEOPLE. “I tried to imagine after they’d done the mold, how would they make it, how it would look. My imagination didn’t do it justice. My favorite part is this beautiful 52-carat pear-shaped ruby. Every part of it is exquisite.”

Jeweler Mouawad hand-set more than 4,200 precious stones (including rubies, diamonds and yellow sapphires) in 18-karat gold to create the fantasy bra and matching belt. “I’ve never worn anything this pricey, and we have to put gloves on when we put it on,” Swanepoel shares. “It’s kind of a big ordeal. The bra comes with two bodyguards and we have to handle it with a lot of care!”

The South African supermodel says that while it wasn’t hard for her to keep her big announcement under wraps (“I want it to be a big surprise!” she says), it will be hard to keep her cool when walking in the show. “Definitely being the Fantasy Bra model is more nerve-wracking [than shooting swim] because it’s a one-time thing,” she says. “Walking around wearing $10 million does seem to make me a little bit nervous.”

What do you think of this year’s bra? Will you be tuning in Dec. 10 to see it in action?

Divine Candice is a non-profit site that is no way affiliated with Candice, her management, co-workers or family members. This is site is ran and maintained by fans for fans. All images, video footage and other media are copyright to their respective owners, no copyright infringement is intended. If you would like any content that is rightfully owned by you removed please contact us.

Tropic of C
CEO and Founder
Since 2018
Candice launched her own swim line on 2018 under the name of Tropic of C. The brand is 100% eco friendly and designed with recycled materials. The brand is avalaible currently in its own e-commerce and other luxury e-commerces listed below.

Want to see her work for Tropic of C? Click here.

Candice has been officially an Angel since 2010. She made her return to Victoria’s Secret after 1 year of hiatus due to her first pregnancy on 2019 shooting for the Fall collection and an upcoming campaign to be released.

Want to see her work for Victoria’s Secret? Click here.